Everyone Deserves A Second Chance

In theory, when you make a mistake you’re supposed to get a second chance and be able to get on with your life. But that’s not really the way it works with the criminal justice system in our society. Once you’ve been arrested, your police record follows you everywhere. Too many citizens looking for honest work have felt defeated by the application question about having any brushes with the law.

Some executives and government officials are starting to realize how unfair and counterproductive this is for those who have paid their dues and are trying to start over. In many states, employers aren’t allowed to ask that question on an application, but Florida is not one of them. In fact, Florida actually makes things tougher with the Negligent Hiring law which almost forces employers to ask about criminal records. The law says that if a worker causes some kind of damage or injury, the employer can’t be held responsible if they did a background check.

“According to the National Employment Law Project (pdf, page 9), half the arrest records in the F.B.I.’s database carry no information about the case’s disposition. Your record might list an arrest for a serious crime — but omit the information that the case was dropped.” – New York Times

In addition to making it tough to find work, a criminal record can make it hard to get a loan, rent an apartment, or get government benefits. To make matters worse, records are often incorrect or incomplete. But there are ways to pass background checks in Florida by cleaning up criminal records.

Unless you have been convicted of a felony or driving under the influence, you may be able to get the record of an arrest sealed or expunged. With certain exceptions, you’ll be able to answer “No” to the dreaded question of “have you ever been arrested?”  And since your arrest is no longer a public record, any mug shots related to the arrest can not be posted online.

According to Florida Statute 943.045 (19), “Sealing of a criminal history record” means that while the record will still be held by law enforcement, it will not be available to anyone else. No one is allowed to post your mug shot online, and you are not required to disclose the arrest to potential employers — or anyone else.

Having your criminal record erased altogether is called “Expunction of a criminal history record” in Florida Statute 943.045(16). This means that the record is physically destroyed. Paper records are shredded and computer files erased (except that the Florida Department of Law Enforcement keeps a copy which can only be accessed by court order.) In general, you can only have a record expunged if no charges were filed after your arrest or if the charges were dismissed. Criminal convictions may not be expunged from the record.

Sealing or Expunging a criminal record in Florida can mean a lot of time and effort. There are many forms to fill out and procedures to follow. A skilled and aggressive Florida Criminal Record Sealing and Expungement Attorney can make all the difference in your efforts to turn the page and get on with your life. Call 407-349-4211 to speak with an Orlando Criminal Defense Attorney at Rivas Law. 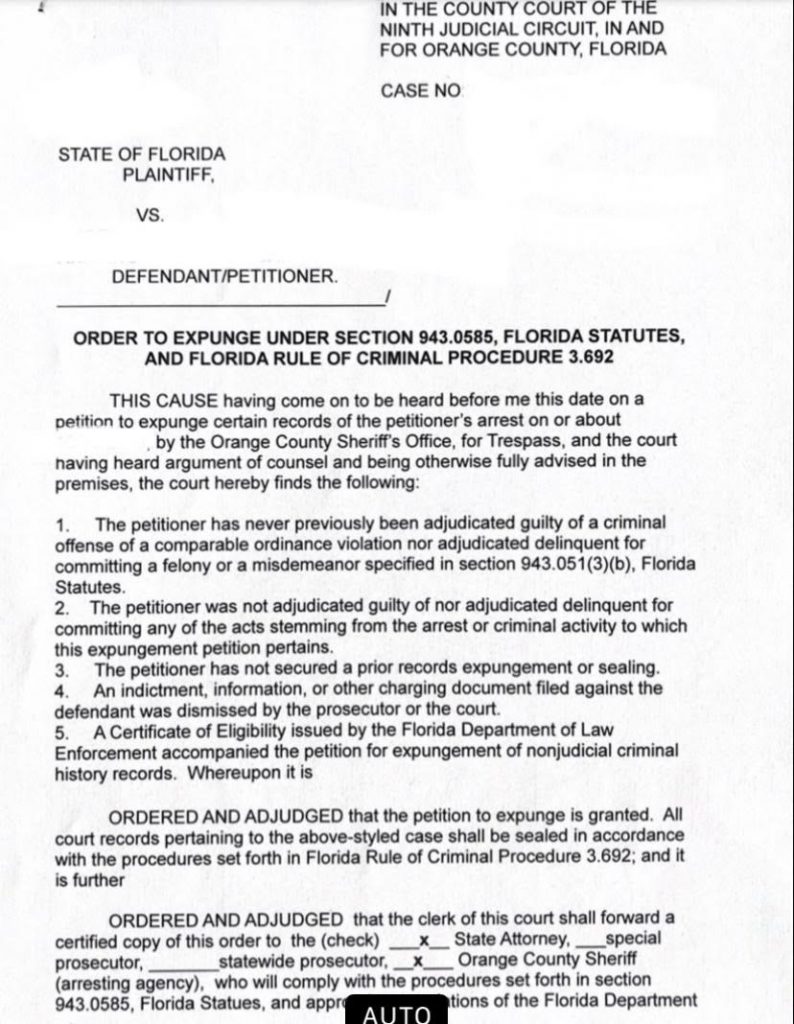